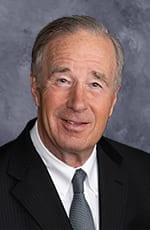 Ted Rieple is the Managing Partner and Founder in 1stWEST Mergers & Acquisitions. Prior to 1stWEST M&A, Ted was a principal in another M&A firm and a private equity investor who evaluated and invested in early stage and pre-IPO companies within the manufacturing, distribution and technology sectors. From 1990 to 1997, he started Strategic Distribution an industrial distribution company and grew the business to $150 million with operations in the US and Mexico. During this period, Mr. Rieple took the company public on NASDAQ and raised $71 million through two public offerings. In 1995, the company was ranked as the 5th fastest growing public company in America and in the top 50 industrial supply distributors in the US. During the period 1970-1990, Mr. Rieple grew within the ranks of Diversey Chemicals to become President and CEO of its North American operations. The company had over $200 million in sales and was a leader in the specialty chemicals industry. Ted has fifteen years of international experience including three years as President and CEO of Diversey Venezuela. Rieple has a unique blend of entrepreneurial, operations, international and investment banking experience. He has extensive experience in small to large company merger and acquisition transactions, IPO and secondary offerings. Ted has served as a board member of both public and private companies and is a former YPO member. He currently serves on the Board of Directors for the Chamber of the Americas. The Chamber’s mission is to facilitate commerce and understanding between the businesses and governments of the Western Hemisphere.

Ted received his B.A. Degree from St. Mary’s University. Mr. Rieple is an avid golfer, skier and enjoys the challenge of road biking in the greater Rocky Mountains.